Experiments with an AD633 Multiplier IC

Something I have always found a little confusing was the idea of signal mixing.  The source of my puzzlement probably has its roots in the audio world of mixing desks for combining the sound from instruments and singers for music recording or live performance.  These mixing desks are (or are supposed to be) additive: their output should be the simple arithmetic sum of all of the inputs, scaled according to how far the sound engineer pushes the fader.

In the RF world, mixing means something quite different.  When we mix RF signals, we (usually) specifically want them to interfere with each other to create frequencies that weren't present in either (because we're usually talking about two) of the original signals.  That is usually the last thing in the world you want to happen in the audio world, but it how a heterodyne radio works (more on this a little later).  For this to happen, the RF signals need to be mixed in a non-linear way, usually by multiplying them together.  It took a while before this difference dawned on me.

The maths behind mixing in the RF sense of the word is pretty straightforward.  It relies on the trignometric relationship:-

That has to be tried.

Inspired by some of the many great W2AEW videos (Alan is my hero!) - specifically this one and this one - I did some some experiments with multiplying a sine wave by a lower-frequency square wave using the diode-switching technique and got some interesting results.  However, the real fun was had with an Analog Devices AD633 multiplier IC.  Its a little beauty: it takes in two signals (differential) and outputs the result of multiplying them together (÷10).

Here is a 1KHz sine wave being multipled by a 800Hz square wave (the yellow trace is the result):- 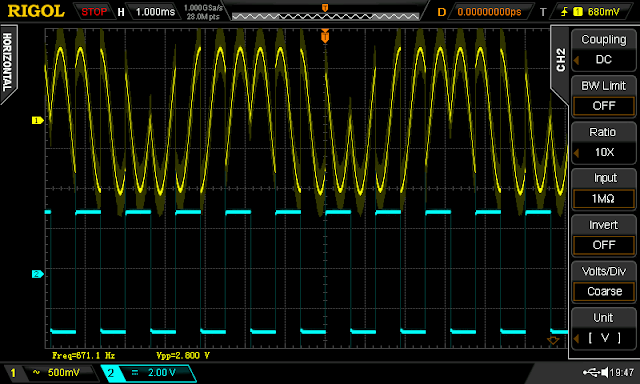 Its pretty easy to see what's going on here - the inversions of the sine wave when the square wave changes state are pretty evident. 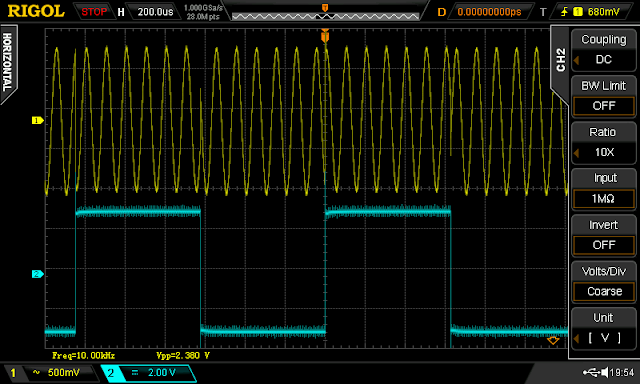 Its a little less obvious here, but if you look carefully, you can still see the sine wave change phase by 180° when the polarity of the square wave changes.

We'll come back to this in a bit.  For now, let's try multiplying two sine waves together, one at 10KHz and one at 800Hz.  In theory, the result will be a signal which is the sum of two new sine waves, one at 9.2KHz and one at 10.8KHz. 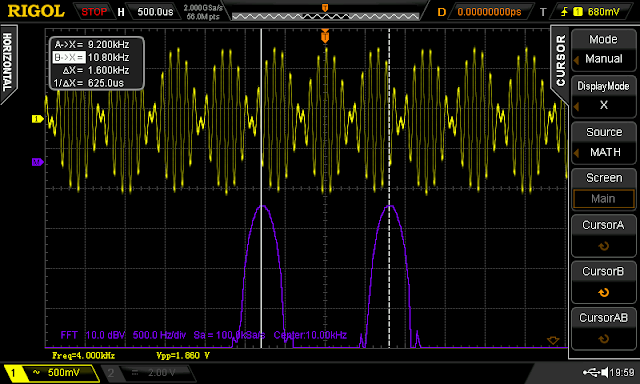 Bingo !!  The purple trace is the FFT and - sure enough - there are two (and only two) peaks at exactly the frequencies that the maths predicts.  Note also that there is none of the original 10KHz signal present (there is no 800Hz signal there either, although it would be off-screen to the left even if there was). 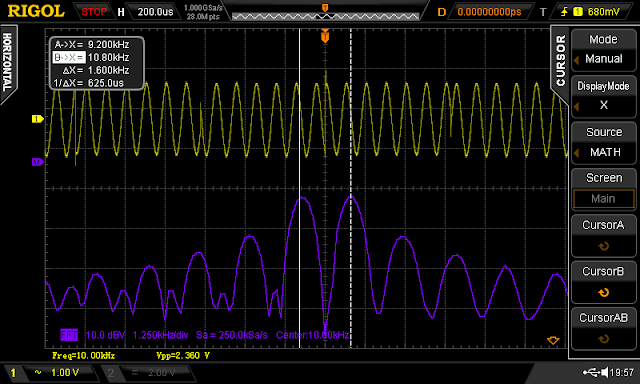 Yep.  The cursors show the fundamental.  The horizontal divisions are 1.25KHz each, so you can see that the other tones are all about 1600Hz above and below the fundamentals.  Again, note that there is no sign of the original 10KHz signal at all...just at the theory predicts.

The plan for the AD633 is to use it as the basis of a bat detector.  Bats' echo-location sounds are somewhere around 48KHz (at least the Pipestrelle bats that are common in Ireland) - far above the range of human hearing.  The idea is to mix the signal from an ultrasonic transducer (hopefully from lots of hungry bats) with - say - a 40KHz sine wave, thus hopefully shifting the bats' sounds into the human-audible range.  This is the same basic principle on which a heterodyne radio receiver works, with a local oscillator being mixed with the target RF signal to produce a intermediate frequency which is then detected with a high-Q filter.
Posted by Eamonn McGonigle at 23:56